It’s been one year since Devilman Crybaby, Masaaki Yuasa’s anime adaptation of Go Nagai’s classic manga, took the world by storm. Devilman Crybaby increased the presence of women in the main cast from a single girl named Miki to two both named, well, Miki. Although they share a name, they have distinct personalities and roles in the story. Miki can no longer be reduced to “the girl,” nor does one character have to represent all of womanhood. Between the Miki Makimura admired by her peers and the Miki Kuroda left behind, Crybaby paints a picture of how misogyny affects women deemed good or bad when they’re truly not so different.

This post contains discussion of rape, as well as spoilers for the original Devilman manga and Devilman Crybaby.

The original manga has only one character named Miki: Akira’s friend and housemate Miki Makimura. She’s introduced as a foil to the then-meek Akira, willing to stand up to and threaten bullies. When Akira becomes Devilman and thus braver and stronger, he’s the one to defend her. In return she pursues him romantically and sexually for the first time. He doesn’t reciprocate her advances, but protects her from demons while she remains unaware of his demonic possession. When Miki’s father mistakes Akira for simply a demon, she loses that protection and dies at the hands of an angry mob convinced she’s a witch. Miki embraces being called a witch and fights back with Molotov cocktails and knives, but ultimately pleads she’s just a girl. Her death embodies the message of Devilman: humans will turn on their fellow humans deemed “demons” or “witches,” the social outsiders or sympathizers. At that point, Akira loses his faith in humankind. 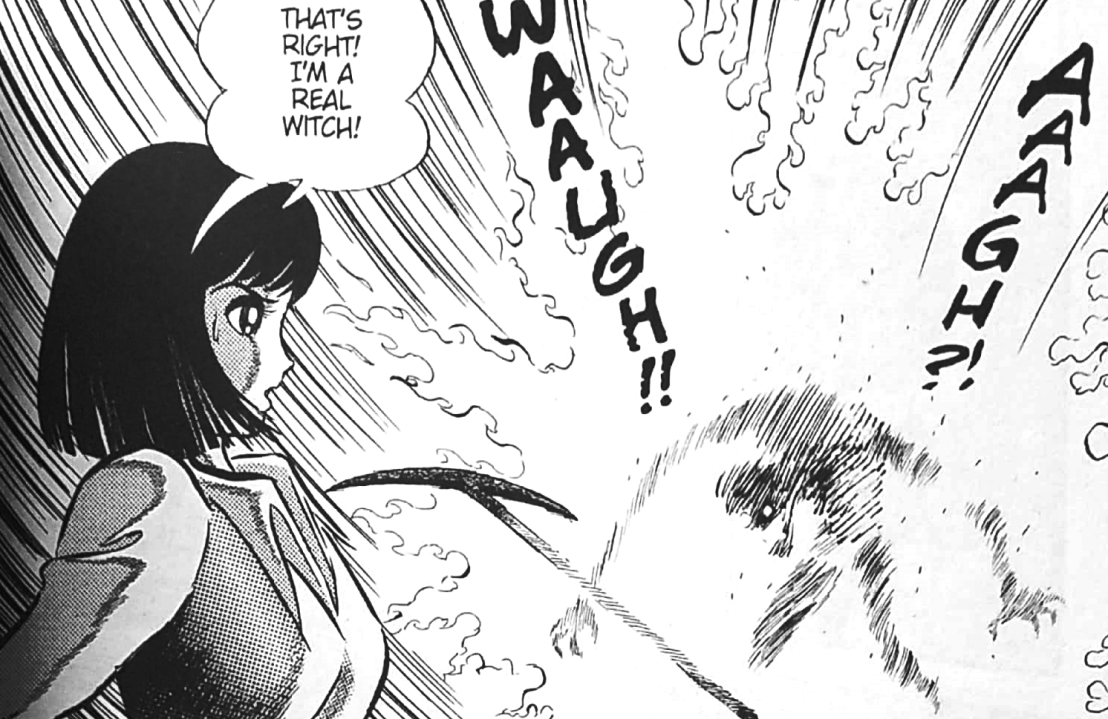 Devilman Crybaby essentially divides manga Miki’s characteristics between two girls: Miki Makimura and Miki Kuroda. In fact when Miki is mutilated by the mob in the manga, she symbolically splits at the torso into two upper bodies as if to symbolize the malevolent witch they saw her as and the frightened girl she truly was. For clarity, the original manga character will be referred to as Miki and the anime characters as Makimura and Kuroda from here on. With two characters, elements of Miki can be explored in different ways. Makimura shares her name and role as Akira’s motivation to protect those he loves, but not all of her personality. She’s pacifistic, and rather oblivious to the men (sexually) interested in her. At first the audience only knows Kuroda as “Miko,” the name of a minor character from the manga who becomes a devilman and joins Akira’s forces. When Myuta learns her true name is also Miki, the audience realizes there’s a bigger picture to Crybaby‘s take on Miki. Demonic possession brings out Miki’s haughty, violent, lascivious side in the unassuming Kuroda.

This bifurcation resembles a radical feminist theory from Mitsu Tanaka, a leading figure in the 1970s Uman Ribu (women’s liberation) movement. Her pamphlet “Liberation from the Toilet” described how women are categorized by men into a false dichotomy of “toilet” or “mother.” According to Mitsu Tanaka, as translated by Ichiyo Muto in The Other Japan: Democratic Promise Versus Capitalist Efficiency, 1945 to the Present:

For man, woman’s image is divided–one image represents mother’s tenderness (motherhood) and the other represents a mere tool to satisfy his sexual desire (toilet). Within this divided consciousness, man allocates his two separate feelings, one each to one of the two imagined aspects of woman, which are again abstractions created by man. Facing this disjointed consciousness of man–a consciousness formed to suit the convenience of the ruling classes–woman, in whom sexuality as tenderness and sexuality as sensuality are one, is dissected and she is forced to live as dissected parts.

Miki has indeed been dissected in Crybaby, splitting her motherliness into Makimura and sexuality into Kuroda. Makimura’s kindness to everyone and belief in the best of people endears her to them. They see her as upstanding young woman, though men like Nagasaki can also take advantage of that kindness. She believes in the power of love to solve conflicts rather than violence, so she responds to threats that way. When Kuroda taunts her and place a wager on the name “Miki,” she takes the odd request (not to mention Kuroda being topless) in stride and accepts. When Nagasaki asks to keep taking photos of her, she agrees despite discomfort because she feels sorry for him. She takes on the role of mother in place of Nagasaki’s disapproving one and Akira’s absentee parents. Kuroda thought there could only be one Miki, only one of them worthy of happiness. Kuroda tells Myuta to be content watching Makimura from the sidelines when he expresses interest in her, as she retreats into the shadows of her apartment building. She’s giving the same advice she’s told herself: she’s not worthy of love, especially to or from someone as good as Makimura, so she can’t approach her. On top of that, she’s a girl in love with another girl. Even if Makimura returned her feelings, their relationship wouldn’t be accepted by society. Instead, Kuroda resigns herself to attention from men like Nagasaki to fill the void. While Nagasaki “takes it slow” in his photography sessions with Makimura, he doesn’t hesitate to rape Kuroda. In Nagasaki’s mind, Kuroda being the one to approach him (unlike how he presumably approached Makimura) justifies how he treats her like a “toilet,” a receptacle for bodily fluids. To him, she’s the “bad girl.” In reality, she’s a teenager who can’t consent and doesn’t have a healthy outlet for her sexuality even after becoming a devilman brings her out her desires.

Makimura may seem better off compared to the “toilet,” but she has to work to constantly uphold the image of the mother. She has to prove herself as someone haafu, biracial “half” Japanese and white, to xenophobic people as well. When she makes updates to her social media about wanting to understand others in response to innocent people being targeted as potential demons, she’s flamed for her sentimentality and “pretending to be a good girl.” In a more extreme case when she encourages for Akira and other devilmen to be accepted and loved by society, she’s doxxed and murdered. Being a mother is only respected when she mothers the right people, not the marginalized. The human mob on the hunt for demons and sympathizers forces the Mikis together, where they’re finally able to confront their feelings for each other. Kuroda lets down her walls to confesses her inferiority complex and love for Makimura all at once. Internalized misogyny made her see Makimura as a rival in athleticism and looks she was losing to, compounded by sharing a name. The competition over the title of Miki, the icon of womanhood in Devilman, reflects how real women compare themselves to others of the same gender. We’re taught there’s only room for one woman–if any–to be accepted and respected, so scrutinize ourselves and resent other women.

Internalized lesbophobia made her unable to recognize her focus on Makimura was also out of love, forcing her further away from Makimura and toward men. With Nagasaki or Myuta or a fantasy of Akira, she didn’t have to compare herself to them. When she confesses to Makimura, she finally expresses her own desires and sexuality after men forcing her to be their sexual object. In turn, Makimura comforts Kuroda with words of love after having to support men like Nagasaki. She replies she could tell Kuroda’s feelings the whole time, and perhaps internalized lesbophobia kept her from acting on her feelings as well. Kuroda cares for Makimura, and Makimura pines for Kuroda. Together, “sexuality as tenderness” and “sexuality as sensuality” converge and break the dichotomy men see as toilet or mother.

They’ve been alienated from each other by society, but finally come together to make one last stand against it. In Mitsu Tanaka’s words, “when a woman becomes aware that it is essentially the same thing and that it makes no difference which category she is classified in, mother or toilet, then she stands up against man and against the powers that be.” Their love can’t stop the apocalypse, but it brings comfort in their final moments. They go beyond Tanaka’s heteronormative theories (see Scream from the Shadows: The Women’s Liberation Movement in Japan by Setsu Shigematsu) by joining forces through same-gender love. On that note, Miki isn’t the only manga character they inherit traits from. In the manga, the same as Crybaby, Ryo Asuka (the human identity of Satan) is haafu and gay. Much has been said about the unfortunate implications of Satan being gay, especially how the manga explains it as due to being intersex, but not so much haafu. However, Ryo’s characterization and role in the story is ultimately an anti-villain, not a monster. Being biracial and two-sexed reflects his moral complexity and the blurring of black and white thinking, just like Akira being both human and demon does.

Still, Crybaby mitigates the unfortunate implications of a gay and haafu antagonist by adding more characters of those groups. Miki, who symbolizes the best of humankind, now has traits in common with Satan himself. Makimura has a white father and Japanese mother, making her and her brother Taro haafu. Kuroda has a love for Makimura so intense it borders on hate, not unlike Ryo’s love for Akira. Women can’t be reduced to toilets or mothers, and haafu and gay people can’t be reduced to villains. From the beginning, Akira is neither singularly demon or human. Crybaby and Devilman at large disapprove of dichotomous thinking, and that should be carried over to treatment of women in real life as well.

One thought on “The Duality of Miki”