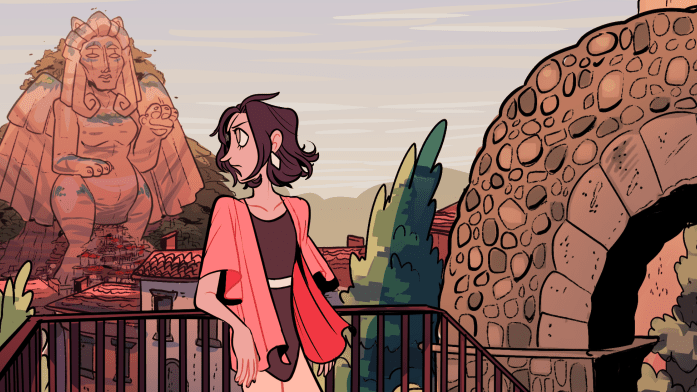 Never Satisfied by Taylor Robin is a fantasy story set in a coastal town of magic, though not everyone has it. Our dear teen protagonist is Lucy (short for Lucien) Marlowe, a magician’s apprentice competing with other fellow apprentices for the government position of representative, a role of protection and power. However, there’s more than meets the eye when it comes to Lucy and this idyllic town.

Mild spoiler warning for chapter 5 of Never Satisfied. (Though I keep some things pretty vague.)

Magister Fidelia Lapointe, a high ranking official, has summoned January Singh to discuss the events of the previous round of the representative competition. January is nervous for a number of reasons, including pushing a fellow competitor to forfeit their win. However, Fidelia reassures her not to be. She praises January’s strength, integrity, and work ethic. Most of all, she commends January for her love for the city and its people. Not only is January’s anxiety soothed, she’s quite taken in by her flattery.

What I admire the most about Robin’s work is their artistic command of mood and emotion. Robin’s vision is sharp and focused, so there’s pages like this which are crystal clear in their intent while still dense with fun, engaging imagery.

Dialogue is key in this scene. Not only for the explicit information conveyed but also for what it tells about Fidelia and January’s respective characterizations. First, you understand why January is in the running for representative and what she sees in the position. It goes hand-in-hand with what’s established earlier about her: someone who’s brash, sincere, and caring towards the people in her life. Second, you witness Fidelia’s shrewd way with words, how she knows exactly how to tap into January’s self-image and values. She matches January’s displayed direct and sincere personality with a direct “no-nonsense” analysis/praise combo. Not that her conclusions are incorrect exactly, but they feel off given Fidelia’s harsh, calculating demeanor up until now. She’s more than a vaguely menacing authority figure in the government, clearly having earned her power through charisma and intellect. The power imbalance between the two is not only in official ranking, but also in experience and wisdom.

As Fidelia talks her speech bubbles swirl around January, at one point wrapping around her neck. While everything she says is true, it’s not simply a recollection of details. There’s a finesse to her dialogue that charms and entraps January. Fidelia literally has her by the throat, even if January doesn’t realize it.

The background and lighting mimic January’s emotions, as the page follows her perspective. The first panel has her under a spotlight, as she feels self-conscious and singled out for reasons she doesn’t quite understand (yet). The darkness surrounding her is full of thorny vines that she cannot see nor escape. She is trapped. However, once Fidelia has lavished her with compliments and validation, January becomes enraptured. The harsh shadows turn into to a rosy light, the vines bloom with soft pink roses, the dust of the spotlight turns to sparkling lights. However, as the thorns haven’t disappeared, neither has the danger.

The panels gradually zoom onto January, allowing us to see her body language change from uneasy to pleasantly bashful. It’s an intimacy that’s matched in Fidelia’s language, the more she pinpoints this girl, both in her self-perception and her aspirations, the more we understand January. The panels act as proxy for Fidelia’s hold on January, as she closes the initial emotional distance between them, even if it’s not a truly mutual intimacy. From another angle though, they’re also key for empathizing with her situation. By watching January, you can understand her assertive nature has sometimes hurt others and come off as malicious. Her underlying integrity is both shown and told to emphasize the nefarious core of the situation. This isn’t a fun mind game; You are watching a child being blatantly manipulated.

Obviously, the most immediate strength of Never Satisfied is Robin’s artwork, which is consistently tremendous. Even the earliest pages are quite lovely, though their artistic growth is definitely not static. They’re definitely one of the best artists on the webcomic scene right now.

Once you dig into it though, you’ll find a lot of compelling plot and interesting worldbuilding. While there are still many mysteries up in the air right now—particularly as backstories are just starting to unfold—it’s not ridiculously dense in lore either. The competition provides a nice avenue to introduce exposition on the key aspects of the world, but there’s so much more than that. Plenty of other problems arise in characters’ lives that organically open up other intriguing facets.

Really, I think the most important part of worldbuilding is how it intertwines with character’s identities and ways of life. Never Satisfied really nails that. For example, a significant theme is class, which includes both actual structure of social classes and the fantasy metaphor of magic that’s integrated as complex factor of social class. Each character’s social class is integral to their character. This doesn’t mean they become a walking lessons on social justice, but rather their principles, worldviews, insecurities, and blind spots are informed by their class. This can include Lucy’s anxieties around their poor magical abilities turning into an alienating persona of conceitedness, or Philomena’s background of wealth contributing to her optimism and good intentions that sometimes hurt others.

The wide cast has characters that are nuanced, fun, and intriguing. The teenagers in particular act like teenagers. They’re all dealing with varying insecurities to varying levels of success. January’s scene is exemplary of how Never Satisfied understands teenagers, with defined personalities and budding maturity, but often struggling in a world that’s run by people more powerful than them. This awkward period of growth allows for their potential to shine, but also for lashing out in the worst of ways. Even when they know better, they don’t feel better.

While Never Satisfied has a strong sense of right and wrong, there’s also empathy and scale. Empathy is not approval but often a means a way to understand why the characters make bad, hurtful, or flawed decisions. Scale means you understand them in a wider context of power, maturity, and impact. As an adult reader, it’s easy for me to see how these characters’ wounds vary from unfortunate but recoverable, to deeply traumatic and symptomatic of wider injustice.

I don’t want to make it all sound like angst and strife though. (I just care about the plot a lot!) There’s a lot of genuine joy and humor to be found in this world as well. The little things from Lucy’s lovely sense of fashion to Ana’s penchant for gossip with her grandmother add immense endearing dimension. Robin has a particularly amazing knack for comedic timing (my favorite example is way too spoilery to link but let me just say, Tetsu is a treasure). That balance is key for making you want these characters to win, even when their goals conflict with each other. That’s the true fun of such a sprawling, rich cast.

At seven chapters and counting, Never Satisfied has a nice amount of backlog without being too much. You could probably read all of what’s posted in a day or two. I sometimes like to go back and reread it myself. It’s truly a treasure of a webcomic and I’m excited for what’s in store for the future.