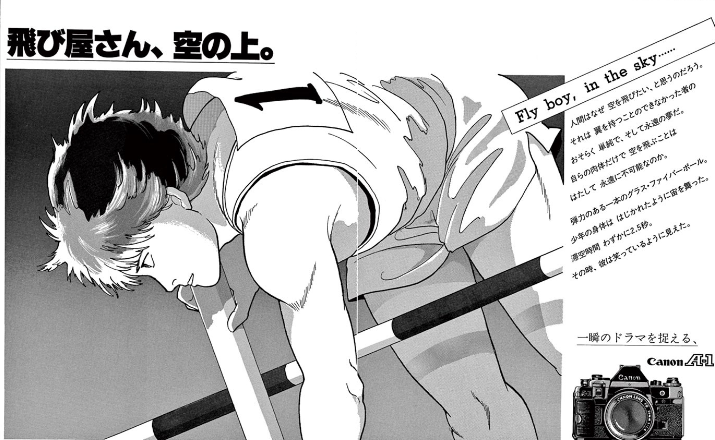 Before the manga Banana Fish by Akimi Yoshida, there was her short story “Fly Boy in the Sky.” It marked the first appearance of Banana Fish characters, published a year before Banana Fish entered serialization. In the one shot, 25 year old Ibe comes across a televised high school pole vault competition and decides to track down and photograph teenage Eiji. Ibe’s photography captures Eiji in a moment of grace he doesn’t know he’s capable of. “Garden of Light,” the final Banana Fish short story by Yoshida, shows how Eiji captured Ash with his own camera in turn.

This post contains spoilers for Banana Fish and discussion of child pornography.

When Eiji sees the photograph of him in the Tokyo gallery, he can’t believe it’s him. He’s never realized what he looks like when pole vaulting: graceful, determined, effortless. Ibe’s photo has captured him in a state he couldn’t see or imagine for himself. For Eiji who feels inadequate as a pole vaulter due to short stature and low skill, who’s so insecure about his appearance he avoids wearing glasses he needs, who’s lost as to where his future will go, it means the world. It strengthens his resolve to continue the sport.

Yoshida brought back Eiji and Ibe as main characters of Banana Fish. Unfortunately, the manga continues “Fly Boy” with a reveal that an injury forced Eiji to quit pole vaulting. After persisting for all of high school, he had to give up in the end. The confidence he’d gained was crushed, but his trip to New York with Ibe brought his smile and warmth back. Ash brought out the best in Eiji: his kindness and understanding. He found self-worth not through physical ability but emotional strength, which was exactly the support Ash needed.

Eiji immortalized his time with Ash with his own photography. Though not shown in the main Banana Fish manga, the short story “Garden of Light” published after and the “New York Sense” booklet included in the special edition reveal an extensive collection of photos. In “Garden of Light,” he’s locked away the pictures of Ash to numb his pain. No wonder he hid them, as the pictures move Eiji and Sing to tears on sight. They’re a memento of their time with Ash, but a reminder they’ll never see him again either. Eiji’s photos present Ash in private, domestic moments. All of the pictures in “New York Sense” and some in “Garden of Light” have Ash in states of undress. Some candid, some not. Some even taken of Ash asleep. He wasn’t awake to give Eiji permission to photograph him, but he trusted him that much.

For Ash, who was forced into child pornography, who’s had people treat him like an object, who has never had someone so close to him emotionally, it must have meant the world to be photographed so intimately. Photographs leave impacts in Banana Fish, for good or bad. Being forced to watch a video of himself being raped shakes Ash early in the story, but much later he shrugs off a folder of pornographic photographs of himself. He tries to seem hardened to it, but Max doesn’t buy the act and burns the negatives to support him. He says Ash doesn’t have to be ashamed, and that the photos don’t reflect who he is. 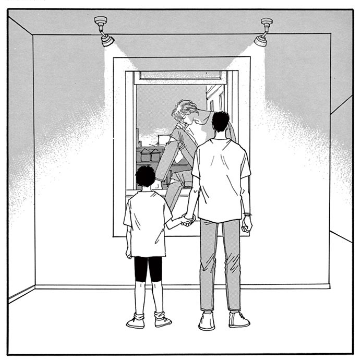 Eiji’s camera reflects the real Ash: just a teenage boy, not a sex toy or gang leader. That’s all he was from Eiji’s point of view, which fostered their relationship. The photography expresses not only who Ash was, but how Eiji felt about him. The “Dawn” piece in his gallery captures him illuminated by daybreak with eyes softly closed. The window framing Ash represents Eiji’s glowing perception of Ash, further framed within a photograph to share with other people. Eiji vowed to believe in Ash no matter what other people said about him or what he did, so he projects his belief in Ash through photos to leave a lasting impression on others. His photos have the ability to transform Ash in the minds of others, just like Ibe’s photos changed Eiji’s perception of himself. That sentiment is powerful, with or without the context of Banana Fish‘s controversial ending.

2 thoughts on “12 Days of Anime: The Power of a Photograph”