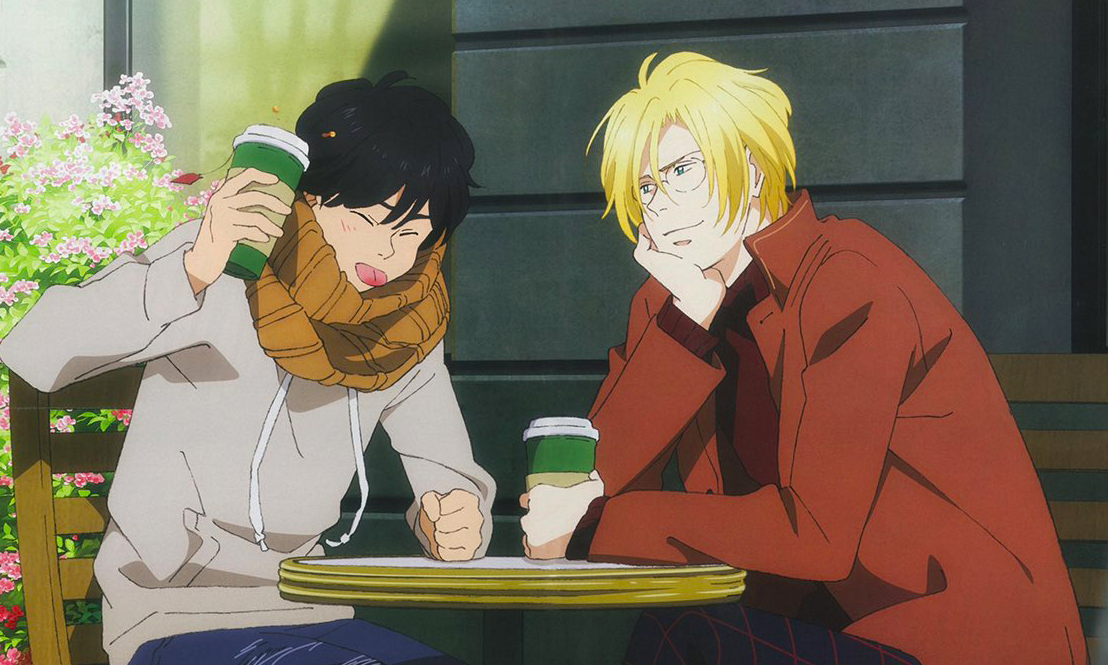 On this day last year, the awaited final episode to Studio MAPPA’s anime adaptation of Banana Fish aired. Some viewers had dreaded it ever since the anime’s announcement, some learned along the way and joined them, and some watched it unfold without spoilers. They dreaded it not because they’d be left with no more episodes to watch, but because of the nature of the ending.

The rest of this post contains spoilers for Banana Fish and brief discussion of child sex abuse.

Banana Fish the manga is (in)famous for the numerous major character deaths, including protagonist Ash Lynx. Studio MAPPA tracked whether characters live or die episode to episode with a character relationship chart on the official website. For every character that dies, they changed their portrait to grayscale. For those who knew what was coming, it was only a matter of time until Ash’s picture would be grayed out. In the final episode of anime, as per the original manga ending by Akimi Yoshida, Ash bleeds out sitting at a table in the New York Public Library as he reads a handwritten letter from Eiji. Though Eiji returns to Japan by plane, he assures Ash they will meet again someday. Eiji’s words comfort him as he succumbs to his wound, resting his head on the table with a smile.

There’s much to unpack from Ash being dead. How literary allusions foreshadow his fate, how he resigns himself to death after a lifetime of resilience, how it all could have been avoided through communication, how it closes the door to recovery from trauma. For many people, including myself, it feels unfair if not cruel to kill off Ash. It hurts to cut down a child sexual abuse survivor in particular, as if such people have no future. It leaves Eiji, the love of his life, behind without a future together as well.

However, Studio MAPPA never adapted the bonus story “Garden of Life” written by Akimi Yoshida. She created the epilogue partially to confirm Ash’s death, showing how it impacts other characters years later in life. For some fans, lack of “Garden of Life” in the anime’s universe leaves Ash’s fate open to interpretation. We’re left with Ash “asleep” in the library. Personally, I would need more from the anime than a recreation of the final chapter to believe Ash survives. If they could update the setting, they could change the story as well.

In preparation for watching Ash’s death the day the episode aired, I invited friends over and cooked Ash’s favorite foods–shrimp and avocado salad, congee with bonito flakes, and hot dogs–to eat together. If I had to watch him die, I would have fun honoring him. It was still painful to watch. To lift our spirits afterward, we watched movies with gay characters who don’t die the rest of the day. Partway through a movie, I glanced at Twitter to read opinions from other Banana Fish fans on the ending and found something else.

Initially, Ash’s portrait in the official character relationship chart was indeed changed to gray scale. However, hours later it silently changed back to color. Days later, the line between Ash and Eiji darkened as well. I couldn’t believe it. As much as I like to indulge in alternate outcomes where Ash lives, I had resigned myself to the inevitable ending. I had nearly completed the stages of grief, then suddenly he was no longer “dead.” It felt as if preparing his favorite foods and reveling in happy endings were an unintentional ritual to bring him back to life. That day, I was celebratory. Ash Lynx is alive, just like I wished.

As time goes on, my feelings have become more complicated. Yes, I prefer Ash Lynx being alive. He deserves it. All the official artwork released of him simply hanging out with Eiji, as if they’re living together carefree post-series, gives me warm fuzzies. On August 11th, Ash’s birthday, there was even a limited edition print from Blockpunk of Ash sitting in a windowsill beside Eiji. In “Garden of Light,” professional photographer Eiji displays a shot of Ash resting at a window in a gallery of his work. By recreating the iconic image with them together instead, it feels like the anime’s alternative to “Garden of Light.”

However, supplementary artwork where he lives isn’t the same as showing so in the anime itself. It results in a paradox of Ash Lynx simultaneously dead and alive. This way, Banana Fish gets to have its cake and eat it too. The anime remains faithful to the manga’s ending, as well as appeals to fans who wish for him to live. The limited print from Blockprint cost 50,000 yen for A2 size and 25,000 yen for A4 size. Of course artists deserve to be paid for their work, but it also feels like ransom for Ash’s fate: he only lives if you pay for their bonus material. Studio MAPPA had their chance to save Ash Lynx, no matter how the powers at be may have limited their adaptation, and they didn’t. If Akimi Yoshida always intended the manga to lead to death, the anime naturally should have differences prior to the finale to lead to survival. When I say Ash Lynx is alive, I don’t mean on behalf of the anime. I mean I’ll do as I always have and ignore the ending, for my own fun and well-being, because it’s true to my understanding and appreciation of Ash and Banana Fish. My time is better spent looking at how fans take matters into their own hands creating fanart and fanfiction of alternate endings than expecting anything from the anime. As cheesy as it sounds, he lives on in my heart more than in expensive art prints.