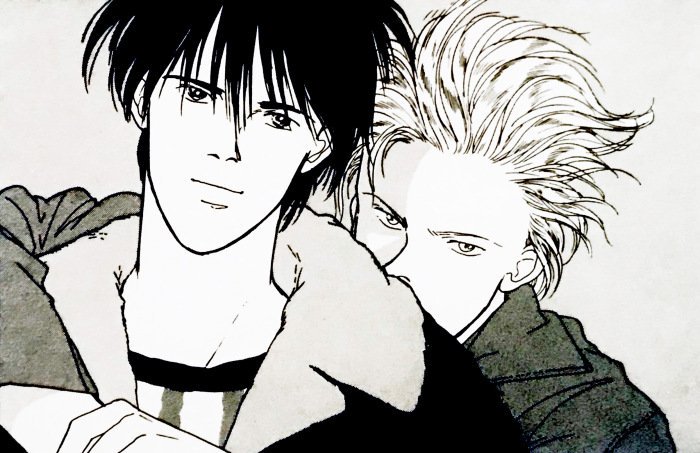 As of today, the anime adaptation of Banana Fish has come to an end. For those looking for a movie to watch or a manga to read to fill the void, look no further.

This post contains spoilers for Banana Fish and discussion of rape, abuse, incest, and suicide.

For those who want something directly connected to Banana Fish…

As you may know, Yoshida cites Best Picture winner Midnight Cowboy as the inspiration for her manga career. It’s easy to see the influence on Banana Fish, from the New York City setting to the core male relationship. Midnight Cowboy follows Joe Buck, a naive wanna-be cowboy, as he leaves behind the town where he was gang raped and moves to New York City to become a hustler. Everything crumbles around him, except his relationship with his impoverished friend Rico. Like Banana Fish it unfortunately contrasts a chase male friendship with repressed gay men and man-on-man rape, but is worth a look as a historical work. Midnight Cowboy is famous for many things, including an X rating for depiction of same-gender attraction and sex and “hey, I’m walking here!”

As you may also know, Yoshida used actor River Phoenix as the model for Ash (after she dropped Stefan Edberg in early volumes). In 1991’s My Own Private Idaho, Phoenix starred in a role uncannily similar to Ash: a young prostitute who sleeps with men, with a runaway mother, who falls in love with another young man on the streets. Yoshida even drew Ash and Eiji in the same pose as Mike (Phoenix) and Scott (Keanu Reeves) from a promotional photo. The film intersects Mike’s story of longing for a home and Scott’s story of estrangement from his politician father (based on Henry IV Part 1, Henry IV Part 2, and Henry V). Worth watching for the tender campfire scene where Mike, improvised by Phoenix, confesses his love to Scott alone. Although the end is ambiguous, be warned it is a tragedy like Banana Fish.

Yoshida redrew stills from other movies too, including Eiji and Ash as Omar and Johnny from My Beautiful Laundrette. It follows Omar, a young Pakistani Londoner who comes to manage a laundrette. He reunites with his white childhood friend Johnny, and together renovate the laundrette. Amidst family drama and xenophobia, Omar and Johnny’s rekindled friendship quickly turns to romance. Although violence breaks out against Johnny and Omar’s brother, Omar and Johnny stay together.

Based on an book written in 1913 but only published posthumously in 1971, Maurice follows the titular character through his life and relationships. He first falls in love with Clive, but their relationship dissolves when the imprisonment of another gay man leads Clive to marry a woman. Heartbroken and desperate, Maurice attempts hypnotic conversion therapy. Thankfully, it plays out as if My Own Private Idaho continued after Scott abandons Mike and Mike finds a real boyfriend, and he finds love with a servant named Alec. Yoshida drew Ash and Eiji as Maurice and Clive, not Maurice and Alec, perhaps because they’re the ill-fated pair.

For those who want more queer-themed vintage shoujo manga…

Although not available in English, Kaze to Ki no Uta (The Poem of the Wind and the Trees) is worth mentioning for its impact on shoujo manga and the striking similarities to Banana Fish. It ended a year before Banana Fish began publication. Both manga involve an interracial relationship between a survivor of rape and another kindhearted boy. The story is one big flashback of a Romani man named Serge recounting his first love Gilbert, a white boy whose abuse from his uncle led to an untimely death. It explores abuse, trauma, oppression, rape, incest, sexuality, and more as Gilbert and Serge form a tempestuous bond against the odds.

An OVA adaptation of Kaze to Ki no Uta also exists, not available in English, directed by Yoshikazu Yasuhiko (best known as the character designer of the original Mobile Suit Gundam and crew on later Gundam projects). It’s essentially the cliff notes version of the sprawling manga, covering the first three volumes and only alluding to the ending.

For a manga from the same time period and movement available in English, there is lovely The Heart of Thomas. The story begins with the suicide of a boy named Thomas after a falling out with his classmate Juli. The arrival of a transfer student named Erich physically identical to Thomas shakes Juli to his core. The mystery around Thomas’ death and Juli’s coldness slowly reveals itself in a psychological drama involving love, abuse, and religion.

For a shoujo manga from a later time period, there’s Tokyo Babylon. Like the politics of New York City in Banana Fish, CLAMP aimed to address social issues in Tokyo, in this case through supernatural mysteries investigated by a shy boy with mystical powers named Subaru. Between adventures, his sister Hokuto encourages Subaru and their older veterinarian acquaintance Seishirou to become a couple. Subaru is embarrassed by the idea, but later in the story when Seishirou is fatally injured he realizes he’s in love with him. Unfortunately for Subaru, they have a fatal connection he hasn’t realized yet.

This film retells the events of the Revolutionary Girl Utena TV series, making it unnecessary to have watched the show to understand. Highly symbolic and surreal in its storytelling, Utena enters the underground sword duels of Ohtori Academy for the right to own Anthy the Rose Bride. After Utena wins the hand of Anthy, they grow closer and Anthy’s past rape by her brother is revealed. And then, characters start turning into cars…

The Handmaiden retells Fingersmith by Sarah Waters as the three part tale of Japanese Lady Himeko and her Korean handmaiden Sook-hee in colonial Korea. Himeko was abused by her uncle to entertain men by reading pornography, and is desperate to escape from him. In a tangled web of deception, without giving away the many twists and turns, Himeko and Sook-hee fall in love and elope.

Without giving too much anyway, Juli has experienced sexual abuse and believes he’s unworthy of love. Although Juli doesn’t begin a relationship with any of his classmates, he accepts love into his heart and live on in the end. As Melinda Beasi beautifully puts it, the manga shows the strength of resolve rather than running away:

Where The Heart of Thomas really stands out here is that, from my perspective, it views that kind of sacrifice as… well, ultimately pointless. Throughout the story, even to the end when Oskar persuades Erich to remain at school rather than retreating to his stepfather’s house, Hagio makes it clear that running away is not the answer. We’re given the romantic option of viewing Thomas’ sacrifice as beautiful and selfless, but we’re clearly shown that Erich’s instinct to fight against that sacrifice is the way to really bring Juli back to life.

For those who want another story with major character death…

Without giving too more away, Midnight Cowboy has major character death and tragic ending in common with Banana Fish.

KazeKi ends on the death of Gilbert, which the reader knows from the very beginning because the story is told in media res.

Not necessarily Banana Fish, but shoujo manga of the 1970s and 80s were an influence on openly x-gender and asexual mangaka Yuhki Kamatani. Nabari no Ou takes place in modern day Japan with a secret society of ninjas, which young Miharu becomes part of when he discovers he harbors the power to rewrite the universe. A young ninja named Yoite finds Miharu and requests “I want you to make it so I never existed.” Yoite threatens to kill Miharu’s friends, so he agrees once he learns to control his power. Their plan has a time limit because Yoite only has a few months to live. From that description, you may see where this is going. Unlike Banana Fish, this manga doesn’t end immediately on the major character death and instead explores grief the importance of memory for a number of volumes and comes from an openly LGBTQ author. For more about Nabari no Ou, see my Intro to the Works of Yuhki Kamatani.

For those who want a generally uplifting gay romance…

From openly gay director Thomas Bezucha, Big Eden follows white artist Henry as he returns to his small Montana hometown where he’s closeted. The more time he spends there to tend to his ailing grandfather, the closer he gets to both his white old flame Dean and Pike the Native American general store owner. It’s basically a Hallmark movie, but gay.

If you haven’t seen this yet, what are you doing? Moonlight is another Best Picture winner, about three time periods in the life of a gay black man named Chiron that looks at masculinity, sexuality, family, love, homophobia, and more.

Another case of if you haven’t seen this yet, what are you doing? Love, Simon is a teen drama about a gay teenager forcibly outed to his school, and the boy he falls in love with via anonymous emails.

2 thoughts on “12 Days of Anime: Movie and Manga Recommendations for the Grieving Banana Fish Fan”